PLUTONA by Lemire and Lenox This Summer 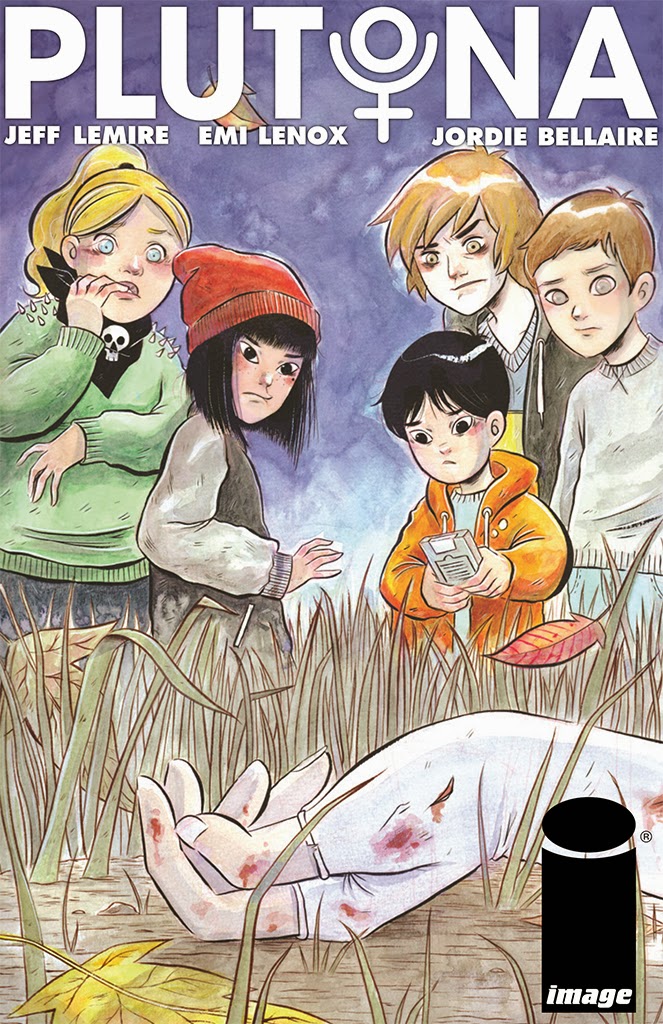 In addition to AD, I am also very pleased to announce PLUTONA, a new collaboration with artist EMI LENOX and colorist JORDIE BELLAIRE from Image Comics.

“Plutona will use the superhero genre as the entry point into a dark journey that explores the nature of friendship and good and evil, all through the eyes of five children alone in the woods," hinted Lemire.

Lenox added: “The children in Plutona face some really dark situations and will realize that not everything is going to be okay. Don’t let the artwork fool you, this is not a children’s book. This is the kind of story I’ve been wanting to create for quite some time and am excited to do so with such talented folks like Jeff and Jordie."

PLUTONA follows the story of five suburban kids who make a shocking discovery while exploring the woods one day after school... the body of the world's greatest super hero, Plutona, laying dead among the mud and grass.

Led by the headstrong Mie and the troubled Teddy, the kids decide to keep their incredible discovery a secret, but it soon starts to tear their young lives apart, setting them against one another and pulling them into a darkness they may never be able to return from.

The series is set to launch from Image Comics in 2015.

AD: AFTER DEATH by SNYDER and LEMIRE This Fall I am very excited to announce a brand new graphic novel from Image Comics this fall "AD: AFTER DEATH" to be written by my good friend SCOTT SNYDER and illustrated by myself.


The book takes place in a near future where a genetic cure for death has been developed, and asks the question, what happens next? How does the world and mankind change when death is no longer an inevitability.  The story follows one man who was at the centre of this discovery, and the multiple lives he lives as time stretches on and the world changes around him.

AD marks the first time I'll be drawing something of this size that I haven't also written myself, and I'm really excited to be collaborating with Scott. Not only is he one of my best friends, but he has proven himself to be one of the very best writers working in comics with his work on BATMAN, AMERICAN VAMPIRE, THE WAKE and WYTCHES.

You can read more about AD, including an interview with Scott and myself, at NY MAGAZINE

AD will be one of FOUR NEW CREATOR-OWNED PROJECTS I'll be releasing in 2015 along with DESCENDER (March), BLACK HAMMER (June) and PLUTONA (August)