WORK IN PROGRESS: ANATOMY OF A WINDOW DISPLAY

I've been asked to create a window display for Canada's finest comic book store THE BEGUILING, to promote my upcoming graphic novel, Ghost Stories. I thought I'd upload pics of the project from it's inception to the final window. So, to start, here is my rough sketch for the window. 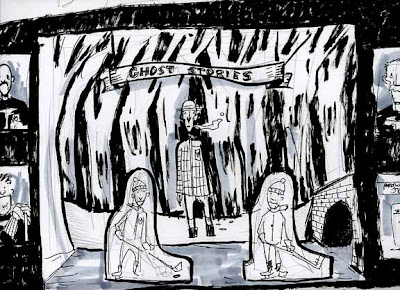 It will be a winter scene, with my main character Lou Lebeuf standing in a snowbank watching childhood versions of himself and his brother playing pond hockey, with a nice forest behind. The kids will look like cut-out "table hockey players". I want it to have a real 3-D feel like the set from a stage play. There are also a number of irregular sized smaller windows surrounding the main window, which I will fill with character shots and the three cover images from my Essex County books.
Posted by Jeff Lemire at 8:53 AM

NEWS: WORD ON THE STREET

The Word On The Street is a FREE literary festival held on September 30th from 11am-6pm in five cities across Canada*. I’m really happy to announce that Toronto’s Word On The Street event (held on Queen’s Park Circle) will feature an extensive comics and graphic novels presence in The Comics and Graphic Novels Tent, presented in partnership with The Toronto Comic Arts Festival. Featuring a full day of author readings, book presentations, and panels on comics creation and publishing, this is going to be a pretty outstanding part of an already massive event. I’m also very proud to say that I’ll be co-hosting in the tent alongside my good friend Mark Askwith, the producer of SPACE television and an excellent comics writer in his own right.

The line-up of panels and participating creators has been announced, and you can find an overview of the programming at the website. Participating creators include Chester Brown, Scott Chantler, Willow Dawson, Ray Fawkes, Stuart Immonen, Karl Kerschl, Jeff Lemire, Nadine Lessio, Brad Mackay, John Martz, Kagan McLeod, Jim Munroe, Ryan North, Ty Templeton, Noel Tuazon, Zack Worton, Chip Zdarsky, Jim Zubkavich, and many more in a host of panels. The Beguiling will also be selling books from all of the attending authors at the venue.

Also! The IdeaSpace Young Adult Marquee will feature graphic novel programming as well! Make sure to check out Eric Kim, and Svetlana Chmakova on the panel MANGA! MANGA! MANGA! THE HOWS AND WHYS OF THESE HOT NEW COMICS! at 12:30pm, and COMICS: DOIN’ IT YOUR WAY with Tyrone McCarthy and Arthur Dela Cruz at 4:30pm.

The Word On The Street is a huge literary event in Toronto which draws more people in than the San Diego Comic Con. It was a huge, huge thrill to be a part of putting together the comics and graphic novel programming for this year’s event, as I think it will continue the trend of putting comics and graphic novels out into the public eye in a way that can’t be ignored. Getting our own major venue to do so–alongside the integration of comics and graphic novels into other venues–is spectacular, and the fulfillment of a personal dream of mine. I remember going to WOTS for the first time nearly a decade ago, and coming home energized about the potential for comics in that sort of environment. I even wrote a column about it at the time that might be around online somewhere… I’m glad to see that potential becoming a reality, seeing that all of the crazy ideas I had as a 20 year old weren’t so crazy, and in fact, would be hotly in demand as I turned 30.

I sincerely hope that any of you reading this will come out for this (completely free!) event, and bring friends… The better it does, the better the next event will be, and so on. 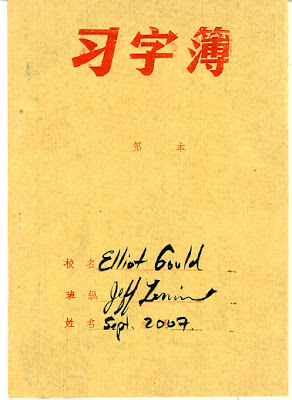 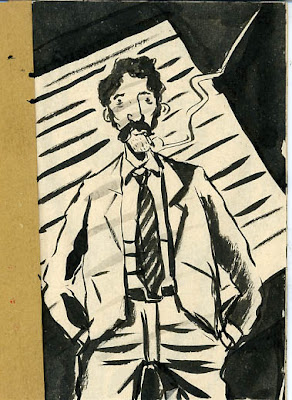 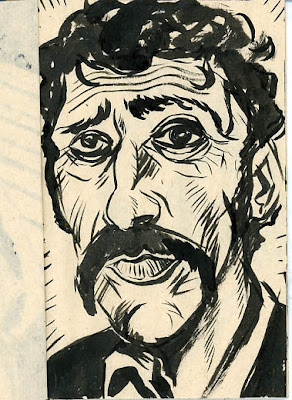 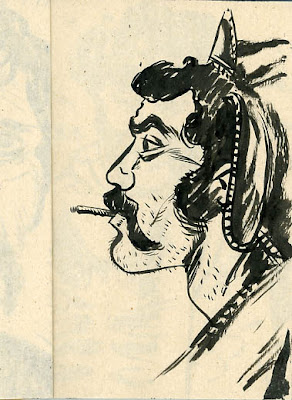 Excerpts from my new mini-sketchbook containing only images of Elliot Gould from the 70's.
Posted by Jeff Lemire at 4:01 PM

SKETCHBLOG: EARLY TALES FROM THE FARM 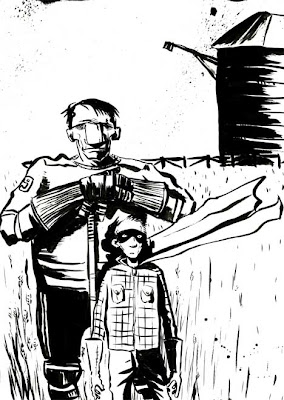 I dug up this really early sketch of the lead characters from Tales From The Farm, it's funny to see how much Jimmy changed by the time I got around to actually drawing the book. Incidentally, I was originally going to title the Essex County series "Tales From The Farm" and the title of Tales was going to be " The Adventures of Chicken Boy"....no seriously.
Posted by Jeff Lemire at 11:35 AM

I will be taking part in a panel entitled "Creating The Great Canadian Graphic Novel" at this years Word On The Street festival in Toronto, September 30. Scott Chantler (Northwest Passage) and Zach Worton (The Greatest) will also be appearing on the panel.

I will also be doing a window display for The Beguiling in October to coincide with the release of Essex County Vol.2: Ghost Stories. in addition, the Beguiling will be sponsoring a release party for the book the last week of October, stay tuned for more details.

Finally, I will be appearing at SPX this year, and debuting Ghost Stories there as well!
Posted by Jeff Lemire at 12:16 PM

PRESS: Tales From The Farm reviewed in The Globe and Mail