THE NOBODY SHIPPING DATE CHANGED 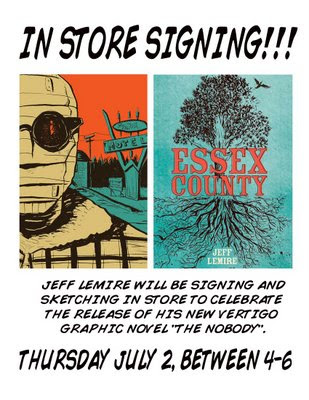 Due to a mix up The Nobody will ship a week late and will now be in bookstores July 7 and Comic Book Stores July 8. I will however be signing at Comics And More at Danforth and Greenwood (steps from the Greenwood subway stop) in Toronto THURDSAY JULY 2, between 4-6 and I will have advance copies of THE NOBODY for sale a week early! I will also have a limited edition Nobody print, free for anyone who wants one and some other freebies, original artwork etc.
Posted by Jeff Lemire at 7:55 PM