I am happy and excited to announce that I will be taking over the writing duties on DC Comics' JUSTICE LEAGUE DARK title as of ISSUE #9! I couldn't be more excited to be working with artist Mikal Janin and with this amazing cast of characters.
For more on the announcement visit DC's BLOG THE SOURCE
Also there is a new interview about my plans for Justice League Dark at COMIC BOOK RESOURCES 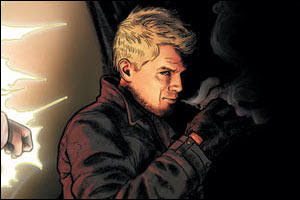 At the helm of the final issue of MEN OF WAR are white hot writers Jeff Lemire (Animal Man, Frankenstein Agent of S.H.A.D.E., Sweet Tooth) and Matt Kindt (Revolver) with art by Tom Derenick.

In this action packed issue, Frankenstein walks through a rain of bombs over 1941 London before being dragged to the depths of the Pacific Ocean and onto the shores of Japan. Will he make it there in one piece so he can team up with GI Robot to defeat the Axis weapon that threatens to turn the tide of the war? Frank’s success will hinge on the help of a four-armed super-spy assassin working in the shadows.

We asked Jeff and Matt about working on this issue and here’s what they had to say:

“I first met Matt Kindt at the MoCCA festival in New York in 2005. He was selling copies of Super Spy and I was selling my first graphic novel, Lost Dogs. We hit it off right away and since then Matt has become one of my closest friends.

Coincidentally, Bob Harras told me I was going to be writing the Frankenstein: Agent of SHADE series, for the New 52, at last year’s Emerald City Con in Seattle. I was sharing a hotel room with Matt that weekend and we spent the rest of the show talking about ideas for the book. Before long it turned into a full-on brainstorming session with Matt and a lot of the ideas from that weekend went into the first 5 or 6 issues of Frank. So Matt has been a secret contributor to the series since it launched in September.

So, when Joey Cavalieri asked me to write this special “Frankenstein in World War II” issue of Men of War, I immediately asked if Matt could co-write it with me. It was an incredibly fun experience. We just kept trying to top each other in terms of the crazy Ideas we could squeeze into the book, and I think fans are going to have as much fun reading it as we had writing it!” – Jeff Lemire

“It was fitting that Jeff and I worked on Frankenstein’s secret World War II history together. We both dug up the craziest ideas we could think of — literally I think we tried to top each other with some outrageous imagery and story ideas. We stitched it all together and then Tom applied the electricity (art) to bring this monster to life. Tom seriously drew what is my favorite double-page spread of all time in this issue. You’ll know it when you see it. I have to say working with Jeff on this has easily been the most fun I’ve had doing comics so far…and I’ve had a lot of fun. And like all unholy unions I think the sum is even crazier than the parts!” – Matt Kindt

This 40-page event full of espionage and monster mayhem is not to be missed!

Thanks to everyone who made ANIMAL MA a part of their "Bestof Lists"for 2011!

CNN’s GEEK OUT highlighted ANIMAL MAN, BATWOMAN, THE FLASH, I, VAMPIRE and JOE THE BARBARIAN in an article about the “unprecedented creativity” in comic books in 2011.

AFTER ELLEN highlighted BATWOMAN in their 2011 review of books.

POPDOSE included BATWOMAN, SCALPED and XOMBI on their list of favorite comics of 2011.

IFANBOY declared DC Comics as their “Publisher of the Year.” Their list of best new books in 2011 included ANIMAL MAN, SPACEMAN, BATMAN and ACTION COMICS. Meanwhile, their list of the top 10 comic events of 2011 included DC: RETROACTIVE and the STAR TREK/LEGION OF SUPER-HEROES crossover, while FLASHPOINT and DC COMICS-THE NEW 52 took the top two spots.