I'll be attending the STUMPTOWN COMICS FESTIVAL in Portland, OR this weekend.

I'll be signing and sketching at at TABLE A-1 and also participating in a number of panels as well as a workshop. My full schedule below!

12-12:45 • Top Shelf presents Nate Powell and Jeff Lemire ROOM B114This panel focuses on the work of two of Top Shelf's most celebrated creators, Nate Powell and Jeff Lemire. Nate Powell will discuss his past work as well as two new projects, The Silence of Our Friends and The Year of the Beasts. Jeff Lemire's Essex County trilogy was a huge hit, leading to his acclaimed Vertigo series, Sweet Tooth. Since then Jeff has also found great success writing Animal Man for DC. Top Shelf is proud to publish his latest original graphic novel, The Underwater Welder.

4-4:45pm • Making Comics: From Script to Inks ROOM B113Eisner nominated cartoonist Jeff Lemire (Sweet Tooth, Essex County) takes you step-by-step through the creation of a page for an upcoming issue of his acclaimed DC/Vertigo series Sweet Tooth. From script to layouts to inks, Lemire will demonstrate how he breaks down a script, lays out a page and pencils and inks the final art. Learn what tools, techniques and tricks he employs to create his comics. This interactive workshop will allow fans and fellow cartoonists to interact with Lemire and ask questions as he works on a page of Sweet Tooth live.


5-5:45pm • Quit Your Day Job ROOM B113Having a career in comics can seem like an impossible goal, but people achieve it all the time. This panel features a wide variety of cartoonists, Jeff Lemire (Sweet Tooth), Joelle Jones (Troublemaker), Daniel Duford (The Green Man of B Street) and BT Livermore (Baby Otto Zeplin), who gather together to discuss their various careers in the world of comics. Moderator Ryan Alexander-Tanner (Dave's Killer Bread) talks with each of them about the ups and downs of their unique career paths.
Posted by Jeff Lemire at 5:51 AM

As announced in USA TODAY, I have drawn a new Batman story written by Damon Lindelof , the co-creator of LOST and the screenwriter behind Star Trek and Prometheus!
"While comic-books fans usually live for Wednesdays, when new issues of their favorite books arrive in their local shops, DC Comics aims to make every day a new comics day. And on Thursdays beginning in June, a new digitalBatman series will showcase stories of the Dark Knight outside of regular DC Comics continuity and feature artists and writers such as Ben Templesmith, Steve Niles, B. Clay Moore, Nicola Scott and Joshua Hale Fialkov. One all-star issue teams writer — and Lost co-creator —Damon Lindelof with artist Jeff Lemire (Animal Man, Sweet Tooth)." -USA TODAY
Posted by Jeff Lemire at 8:00 AM 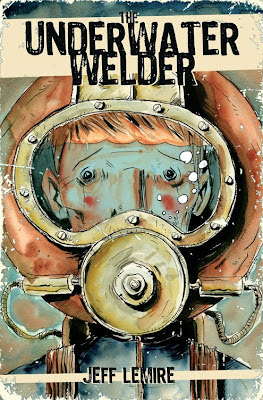 My next original graphic novel, THE UNDERWATER WELDER will debut at San Diego Comicon this July and ship to stores soon after.
There is a new interview about the project at NEWSARAMA, and a preview at CBR! 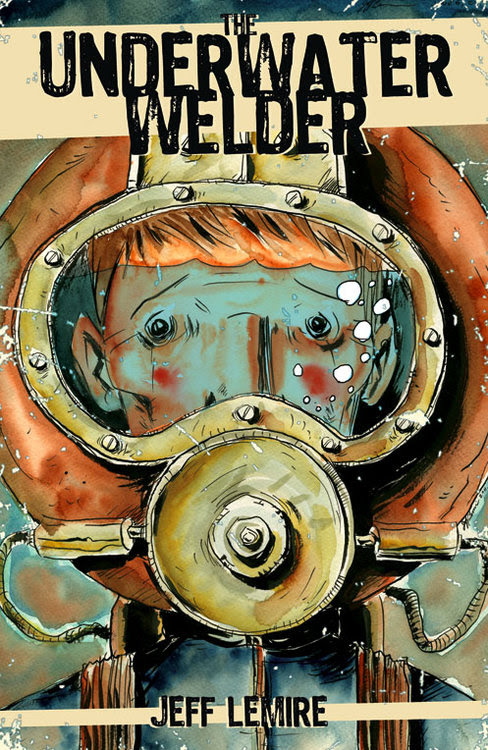 Pressure. As an underwater welder on an oilrig off the coast of Nova Scotia, Jack Joseph is used to the immense pressures of deep-sea work. Nothing, however, could prepare him for the pressures of impending fatherhood. As Jack dives deeper and deeper, he seems to pull further and further away from his young wife, and their unborn son. But then, something happens deep on the ocean floor. Jack has a strange and mind-bending encounter that will change the course of his life forever. ... Equal parts blue-collar character study and mind-bending science fiction epic, The Underwater Welder is a 250-page graphic novel that explores fathers and sons, birth and death, memory and truth, and treasures we all bury deep down inside.

You can Pre-order now at TOP SHELF or at your local comic book shop or book store.
Posted by Jeff Lemire at 6:43 AM 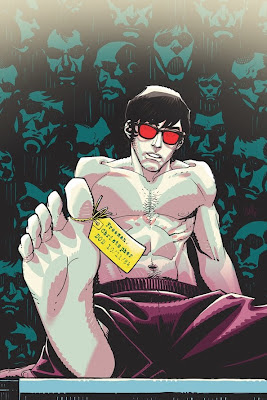 As announced today by WIRED MAGAZINE, DC Comics will be launching NATIONAL COMICS this July. The series will include a series of extra-sized one-shots spotlighting new takes on obscure or little known characters. The first issue is one of my favourite old DC and Vertigo Characters, KID ETERNITY, written by me with art by the talented CULLY HAMNER (his amazing cover featured above).
So make sure to let your local comic shop know to reserve you a copy of this special 48-page story, described below!
NATIONAL COMICS #1: KID ETERNITY, written by Jeff Lemire with art by Cully Hamner will center around Eternity. This is the story of police coroner Christopher Freeman. After being given a second chance on life, he finds himself with the ability to resurrect the dead. Freeman uses his new ability to help those he resurrects to find their murderers and to gain closure, so they can continue to the other side.
Posted by Jeff Lemire at 9:58 AM