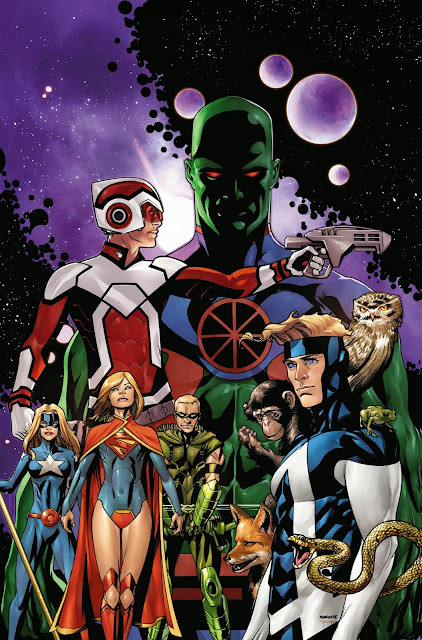 Last Summer, DC Comics and I announced that I would be taking over as the writer of the comic book series Justice League of America, along with artist Mike McKone, and changing the title to Justice League Canada in 2014.

Since then I have been working steadily on the book, and my plans for the series continued to expand and grow and DC and I mutually agreed that the Canada title was too limiting for the cosmic scope the series was taking. As a result, JLA will be ending in April and my book will become a brand new ongoing series called JUSTICE LEAGUE UNITED!

Justice League United will launch in April with an extra-sized Zero Issue followed by #1 in May.
And the first storyline will be titled: Justice League Canada.

The team will still be based in Canada and the book will still introduce a brand new First Nations Canadian superhero to the DC Universe. More details on this new character, her origin and her powers, will be released in the weeks to come.

The roster of the new Justice League team will be a collection of some of my favourite DC characters: ANIMAL MAN, GREEN ARROW, STARGIRL, MARTIAN MANHUNTER, ADAM STRANGE, SUPERGIRL, ALANNA STRANGE and HAWKMAN. The JLU's headquarters will be set in Moosonee, Ontario and their missions will juxtapose adventures firmly set in rural Canada with more cosmic, planet-hopping high adventure around the galaxy.

More details about the new series can be found in a recent interview I did with USA Today...