NELVANA of the NORTHER LIGHTS KICKSTARTER 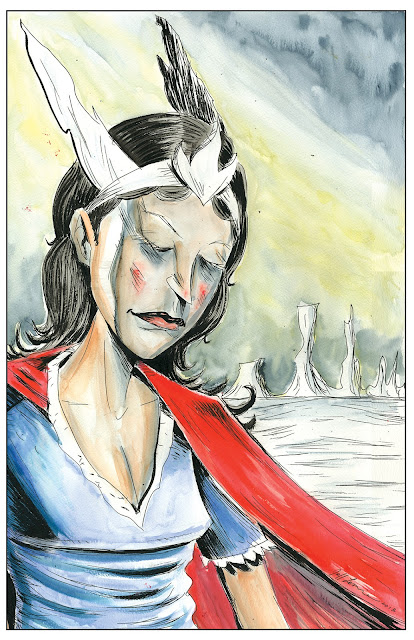 Toronto, ON – Two Toronto-based comic book historians, Hope Nicholson and Rachel Richey, will be launching a Kickstarter campaign to reprint Nelvana of the Northern Lights in its entirety. The campaign commences October 1st, 2013 and concludes on October 31st, 2013.
During WWII, the Canadian government banned the import of US made luxury goods. Bereft of Superman and Batman comic books, Canadian publishers rushed to fill the void, creating hundreds of original comic book characters. Nelvana of the Northern Lights, created by Adrian Dingle, was the best-known of this era, responsible for selling millions of comic books across the country. Nelvana was an Inuit goddess in a miniskirt brought to earth to protect Canada from the Axis powers and outer-space invaders. She’s one of the world’s first superheroines, predating the better-known Wonder Woman by four months.
After WWII, none of these comic books has since been seen by the public.
The campaign is supported by the contributions of internationally-renowned local artists including:
Nelvana of the Northern Lights will be reprinted with the permission of the copyright holders, Corus Entertainment and the National Archives of Canada.
About Hope Nicholson and Rachel Richey :
Hope Nicholson and Rachel Richey are comic book historians who participate in international fan and academic conventions to promote Canada’s comic book legacy. They are currently involved in the research and production of Lost Heroes, a documentary on Canadian comic history set to air on Superchannel in Fall 2013, directed by Orphan Black writer/producer Will Pascoe.
Rachel has worked closely on the John Bell Collection of Canadian Comics at Library and Archives Canada, and documents Canadian comic books for the blogs Sequential and Comicsyrup.