ENTERTAINMENT WEEKLY Calls TRILLIUM 1 of 5 Comics to Watch at COMICON!

"We’re mere days away from the official launch date of annual pop culture festival Comic-Con. And while we’re all busy buzzing over the movies and TV shows that will soon colonize your Twitter feed, it’s important not to forget the “Comic” part of Comic-Con. The major comics publishers will all be in attendance, showing off teases for upcoming books and new crossovers — here are the five comics we’re excited to learn more about in San Diego..."

5. Trillium
Star-in-the-making writer-artist Jeff Lemire is set to unveil his new creator-owned miniseries, a futuristic adventure billed as “the last love story every told.” Lemire’s work is always strange, emotionally charged, and utterly unique, and Trillium looks like the most fascinating entry in Vertigo’s impressive upcoming slate (which also includes Neil Gaiman’s return to The Sandman.)

See below for an exclusive PREVIEW as well as my COMICON SCHEDULE
Posted by Jeff Lemire at 4:37 PM

Check all the nominees here. 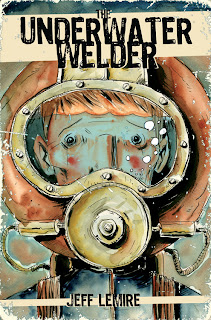