From The "BC REFUGEE BLOG":

Wow!! This is extremely well done. If you were not exactly fond of crime comics before, you might be after reading this. It’s the best collection of any kind that I’ve come across in a good long time. All the stories are premium quality. All the art is deserving of your attention. Noir is “all thriller, no filler.” This is the kind of quality I was hoping to see in the new CREEPY series, which I gave praise to for it’s ambition but expressed disappointment for it’s execution. NOIR does not disappoint. It satisfies. Most of the stories have twist endings that you expect to see in the horror anthologies - - - and they are mostly clever and somewhat unexpected rather than predictable. 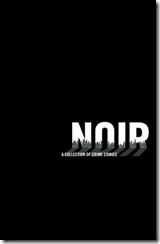 Dark Horse has assembled an army of stellar writers and artists to contribute to this anthology, of which I sincerely hope there are more to come: Brian Azzarello, Eduardo Barreto, Ed Brubaker, David Lapham, Jeff Lemire, Fabio Moon & Gabriel Ba, Dean Motter, Tom Orzechowski, Sean Phillips and Clem Robins. I’m also glad to see for my first time the works of Alex de Campi, Matthew & Shawn Fillbach, Stefano Gaudiano, Rick Geary, Paul Grist, Joelle Jones, Kano, Ken Lizzi, Chris Offut, M. K. Perker, Hugo Petrus and Gary Phllips. Every single one of them made a favorable impression on me. I kid you not. There is a baker’s dozen of stories in NOIR, and not a single one is a blank - - all silver bullets.

“Open The Goddamn Box’ opens the collection, and takes us to David Lapham’s world of Stray Bullets. Stray Bullets is one of those titles that I admire, especially for Lapham’s ability to portray all-too-realistically the degenerative side of human nature - - with grit and shocks galore and usually with a depressing ending. It’s that darkness that makes me avoid it and keeps me from being a regular reader. I’m relieved to report that this story at least ends in a positive fashion for the only character worth caring about. Two 15-year-old male perverts decide to kidnap, rape and kill a neighborhood female who they bear a grudge against for an incident in third grade. One is a budding psycho and the other is a common thug, content to be bossed around and always getting caught up in misdeeds. Credit Lapham for his disgusting but accurate portrayal of these characters - - they even remind me of some creeps I shared the same high school with. Sex is never about love or longing with these types - - it’s all about the machismo and domination, a real power trip. (For an audio-visual experience, read this story while listening to “Boys Who Rape Should Be Destroyed” by The Raveonettes.)

First with the new SWEET TOOTH series, and now with “The Old Silo” story in NOIR, Jeff Lemire impresses me with his ability to depict characters with seeming little effort. Just a few facial lines and angles and you get a clear impression of the struggling farmer that this story centers around. This story would have been a perfect selection for the recent CREEPY revival and seems more in tune with the spirit and tone of the original series than some of the actual features that made it into that first, disappointing issue.

“Yacht On The Styx” features Dean Motter’s creation, Mister X - - and this story is one of several featured in NOIR that really hits the mark in terms of paying homage to pulp fiction, classic detective yarns and the EC style of crime stories. Same goes for “The Last Hit” by Offutt & Kano/Guadia 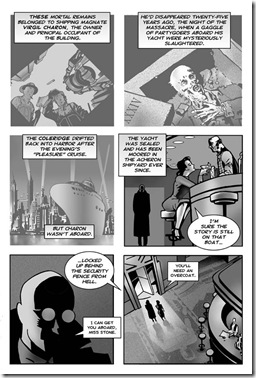 no about a veteran hit-man now entering his senior years and being set-up on his final mark. “Fracture” centers around a subway station encounter and is one of the more challenging stories in this collection, as it leaves the dialogue behind and resorts to caption-less mini-panels to move the story along - - albeit down several different paths leaving us to determine which is reality and which is fantasy. Very interesting.

That is just a small sampling of what’s in store in this collection. The art styles will remind you of many classic works from the past as well as classic illustrators, including Wally Wood and Jack Davis. There are a variety of stories and themes with no two stories seemingly alike. A night janitor stumbles across a suicidal accountant in the middle of taking down an entire office staff. A “playing-card” burglar picks the wrong household 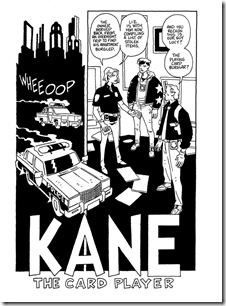 to steal from. A jealous man hires a hit-man to eliminate his wife’s no-longer-secret lover with an unintended outcome.

There’s a short and clever illustrated text piece in the center of the book that could easily be found in Alfred Hitchcock’s Mystery Magazine. In “21st Century Noir” (a Criminal emission) Ed Brubaker and Sean Phillips remind us that lonely men will always be persuaded by beautiful but bad women to do the wrong things. It’s all over in six pages as we meet The Lover, The Wife, and The Husband and then the surprise. I love all these tales, but my favorite is “The Bad Night”, the final story by Brian Azzarello with art by Fabio Moon and Gabriel Ba. A thug petitions to join a crime family and gets his audition, assigned to steal a valuable necklace. It’s the who, what, and when this occurs that will make you smile with appreciation for Azzarello’s creativity, especially the caption in the final panel.

NOIR is a keeper. Make a space on the book shelf. 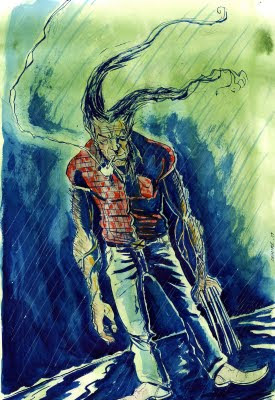 This new painting of Wolverine will be part of an auctuion to help raise money for the SHUSTER AWARDS. Keep an eye on thier site for more details. 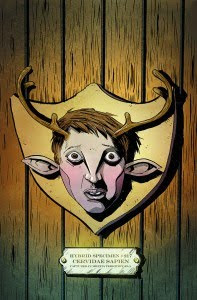 What could this mean for Gus!?
Posted by Jeff Lemire at 4:18 PM

The Sweet Tooth #1 Promotional Sketch offer has now ended. I would like to thank everyone who sent their copies of Sweet Tooth #1 along!
Posted by Jeff Lemire at 12:14 PM

OUT THIS WEEK: DARK HORSE NOIR

This week sees the release of Dark Horse's NOIR anthology, featuring an brand new 10-page story, "THE OLD SILO" by myself as well as folks like Brian Azzarello, Ed Brubaker and many other top talents. Click here to Preview!

"It's always a pleasure to read a comic where the writer is drawing as well. There's a connection there that isn't often as tight in a team situation. Sweet Tooth #2 is proof of that, as Gus's overt horror and quiet fascination at basically everything Jepperd stands for is palpable on each panel with very little outright mention of it. By the same token, there's a begrudging affection for Gus that's born within Jepperd over the course of the issue, and even though he's mostly surly to the young boy, Lemire's artwork betrays the hard exterior. It also raises the question of why Jepperd may not want to get close to Gus, what his true intentions are, and whether the Preserve really is what he claims (or if it exists at all). These layers and opportunities to pick them apart only make Sweet Tooth a more enjoyable read.

DC's Vertigo imprint has gotten a big push lately, but Sweet Tooth has quickly become my favorite of the new offerings. Its deceptively simple premise is backed up by Jeff Lemire's entrancing vision for the title's world and complex, emotive artwork. If you were enticed by the $1.00 first issue, you'll be happy to know that the full-priced issue #2 is just as much of a bargain for all its fantastic material."
Posted by Jeff Lemire at 9:04 AM

And for fans of Jeff’s work, he’s the artist on the insert story “The Tale of Brutus the Bold” in this month’s HOUSE OF MYSTERY #18 (also on sale 10/7). This issue also features guest artist Werther Dell’ Edera (DARK ENTRIES).

"I would crawl over broken glass to read this." –Jason Aaron (SCALPED,Wolverine )

Vertigo's most unusual and terribly cool post-apocalyptic road-trip epic is unstoppable. The innocent deer/boy Gus is forced from his forest sanctuary into the almost annihilated world of men where he's desperately led by a different kind of force of nature: A cold killer who promises the only chance of salvation. Get onboard the buzz bandwagon with the ongoing series mash-up of horror, high adventure and friendship by Eisner-nominated storyteller Jeff Lemire (THE NOBODY, Essex County Trilogy).

"The Beauty of Decay" Part 3! Fig, Peter and Jordan venture out into the city of ghosts to visit the long-abandoned Pathfinder's Academy where the most desperate specters wail and gnash. But the Pathfinder's Academy holds more than ghosts – it also contains ancient dark secrets that will change Fig's life forever. Featuring guest art by Werther Dell'Edera (LOVELESS) and a special tale of Fig Keele: "Teen Detective" by SWEET TOOTH creator and Xeric, Alex and Shuster Award-winner Jeff Lemire (THE NOBODY, The Essex County Trilogy).