The Beguiling is proud to announce the official launch ofThe Underwater Welder, the new original graphic novel from Jeff Lemire. Lemire is the award-winning author of The Essex County Trilogy, picked as a Canada Reads finalist, the author of the graphic novels Sweet Tooth (series), Lost Dogs, and The Nobody, and a prolific contributor to DC Comics' superhero line, including the hit series Animal Man and Justice League Dark.

The Underwater Welder is Lemire's eagerly anticipated thematic 'follow-up' to Essex County; its seemingly benign rural slice-of-life tale set off the coast of Nova Scotia giving way to far more mysterious and unfathomable experiences. Lemire's work has been praised with starred reviews by Publishers Weekly and Booklist, and the accolades are already pouring in for The Underwater Welder:

“The most spectacular episode of The Twilight Zone that was never produced. I really, really care about the people in this story... And I can pretty much guarantee you will too.”
—from the introduction by Damon Lindelof (LOST, Star Trek, Prometheus)

“A moving, brilliant, and fiercely original work about loss, longing, and love. Full of piercing moments that will stay with you for long after you’ve finished reading, The Underwater Welder is a testament to the basic truth that down in the depths or up on land, there’s nothing more haunting and wondrous than the human heart. A masterpiece of visual storytelling.”
— Scott Snyder (Batman, Swamp Thing, American Vampire)

The Underwater Welder Book Launch and Discussion will take place on Saturday, July 25th at Innis College Town Hall, and will feature a presentation by Lemire from the new work, an on-stage interview with Q&A, and a signing. Admission to this event is $5 for two persons, however, anyone purchasing The Underwater Welder in-store at The Beguiling will receive a free ticket good for two admissions and guaranteed seating. Tickets and The Underwater Welder advance copies go on sale Monday, June 25th at 11am.

PRESS
This event is being hosted by The Beguiling Books & Art, as part of our 25th Anniversary celebrations in 2012. All press inquiries should be directed to Christopher Butcher, Manager, chris@beguiling.com.


ABOUT "THE UNDERWATER WELDER"

As an underwater welder on an oilrig off the coast of Nova Scotia, Jack Joseph is used to the immense pressures of deep-sea work. Nothing, however, could prepare him for the pressures of impending fatherhood. As Jack dives deeper and deeper, he seems to pull further and further away from his young wife and their unborn son. Then one night, deep in the icy solitude of the ocean floor, something unexplainable happens. Jack has a mysterious and supernatural encounter that will change the course of his life forever.
Equal parts blue-collar character study and mind-bending mystery, The Underwater Welder is a graphic novel about fathers and sons, birth and death, memory and reality, and the treasures we all bury deep below the surface.

JEFF LEMIRE is one of the most acclaimed North American graphic novelists of recent years. He first entered the comics field with the self-published anthology series Ashtray(2003), followed by the Xeric-Award-winning graphic novel Lost Dogs (2005).

His Essex County trilogy of graphic novels (2007-2008, complete edition 2009) have received tremendous acclaim, including nominations for the Eisner, Harvey, and Ignatz Awards. In 2008 Jeff won both the Joe Shuster Award and the Doug Wright Award, recognizing the best in Canadian cartooning, as well as the American Library Association’s prestigious Alex Award, which recognizes books for adults that appeal to teenage readers. Essex County was named one of five official 2011 selection of the CBC’s Canada Reads program, recognizing the “Essential Canadian Novels of the Decade,” and landed first place in the “People’s Choice” poll with more votes than the other four books combined.

Jeff’s other works include the graphic novel The Nobody and the acclaimed ongoing series Sweet Tooth for Vertigo, as well as writing DC superhero series such asSuperboy, Frankenstein, Animal Man, and Justice League Dark. He returns to Top Shelf this summer for The Underwater Welder.
Posted by Jeff Lemire at 6:07 PM


I'll be at Heroes Con in North Carolina this weekend, here is my full schedule:

I will not be doing commissions, but will be happy  to sign as many nooks as you bring and do a quick doodle in any graphic novels or trade paperbacks you have!

I will also have original art from SWEET TOOTH and BATMAN: LEGENDS OF THE DARK KNIGHT #1 available for sale.

FRIDAY, JULY 22 - 4:30pm
Room 203A
WRITING FORUM
The Leap from Indie to Mainstream-- They can do it all--find out how!  Join Matt Kindt (Superspy) and Jeff Lemire (Animal Man) as they discuss the craft of writing and juggling multiple ideas!

SATURDAY, JULY 23 - 11 am
Room 208AB
DC 52
Our own Doug Merkle has been a life-long Marvel reader who tried all of the new DC 52 and liked what he read.  So join him as he sits down with Cully Hamner (Blue Beetle), Ivan Reis(Aquaman), Scott Snyder (Swamp Thing), Jeff Lemire (Animal Man) and Joe Prado (Green Lantern).  Hey Shelton-- hold my calls for an hour--I ain’t missing this one--And neither should you!

Early Reviews of THE UNDERWATER WELDER From Multiversity Comics


The first reviews of my upcoming GRAPHIC NOVEL, THE UNDERWATER WELDER is in from Multiversity Comics!  and THE WEEKLY CRISIS!

"This story is captivating in narrative and also stellar in execution of tone. This is high literature, make no mistake." -THE WEEKLY CRISIS

The 10-page Batman story that I drew, written by LOST/PROMETHEUS genius and all around great guy, Damon Lindelof is now available exclusively for digital download from DC Comics!

Below is a look behind the scenes at the layouts and inks of the first two pages of the comic. So see the final coloured and lettered art you can purchase the comic for only $0.99 right here!

You can read an interview with Damon and I here at Entertainment Weekly. 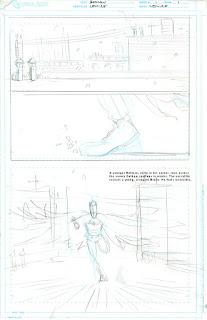 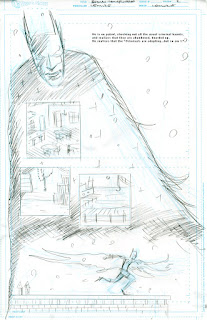 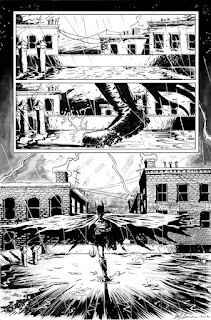 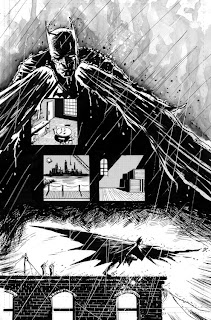 We announced back in April that an all-new Batman digital comic book would be coming soon.  Today, we’re excited to reveal that the first chapter from LEGENDS OF THE DARK KNIGHT will be released tomorrow, followed by new chapters out every Thursday. Taking place outside of DC COMICS – THE NEW 52 continuity, the new series features several stand-alone stories by various creators that chronicle different cases handled by The Dark Knight.

Kicking off the first chapter is the all-star line-up of LOST scribe Damon Lindelof with artwork by the critically acclaimed Jeff Lemire.  The line-up for the first six chapters of LEGENDS OF THE DARK KNIGHT is as follows:

Mark your calendars – Thursdays are officially all about The Dark Knight and you can get your weekly fill here for $.99 each.