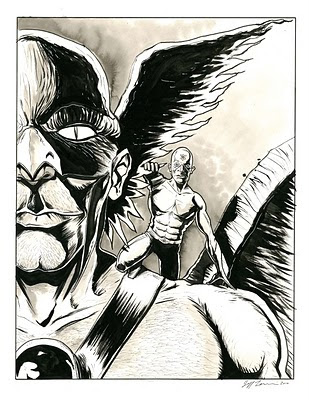 This Hawkman and The Atom drawing is being auctioned off as part of a fundraiser for The Doug Wright Awards! (details below)


The Doug Wright Awards are a non-profit organization that recognize the best in Canadian comic, past and present, at an annual ceremony held in Toronto.

To help us do this we thought it would be fun to ask some of the top cartoonists in the country to draw a piece of art inspired by the theme: Classic DC Comics characters.

The art will be on display at the Toronto Comic Arts Festival (TCAF) on May 8 and 9. The pieces are being auctioned off on eBay right now: shop.ebay.ca/canartsales/m.html?_nkw=& _armrs=1&_f...

All proceeds going to The Doug Wright Awards.
Posted by Jeff Lemire at 11:03 AM