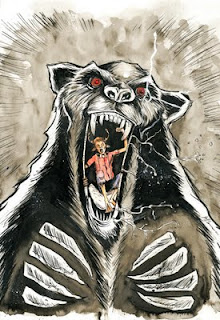 I am auctioning off this cover from SWEET TOOTH 21 to help raise money for Sparkplug Comics' founder DYLAN WILLIAMS who is battling Cancer and can't afford to pay his medical bills. Other artists are auctioning off great adaptations of Philip K Dick covers as well, so go check those out too!
100% of the money will go to help Dylan with his medical bills, so please bid generously!
http://www.ebay.com/itm/Dylan-Williams-Benefit-Sweet-Tooth-21-original-cover-art-Jeff-Lemire-/120774474786#ht_500wt_1413

After only one day on the stands the first issue of the new series written by myself and illustrated by the increedibly talented Travel Foreman has already sold out!
It was also iFanboy's PICK OF THE WEEK! (Thanks guys)
Here's a roundup of what some people are saying...
"This book sets the benchmark for this week as to what a New 52 #1 should be." -ROBOT 6
"Lemire and Foreman have the makings of being an epic creative team that I think we’ll be talking about for years...Animal Man #1 is the breakout hit of DC Comics’ “The New 52″ and just reset the bar for modern super hero stories." -iFanboy
"My new favorite Monthly Comic!"- Geoff Johns
"The book that surprised me the most and quickly became my frontrunner as the sleeper hit of the entire relaunch: Animal Man #1" - Newsarama
Posted by Jeff Lemire at 7:05 AM