As we edge closer and closer to the series' debut, CBR presents the exclusive premiere of Valiant Entertainment's video trailer for Jeff Lemire and Mico Suayan's "Bloodshot: Reborn."
"[A]t the end of 'The Valiant,' something very dramatic happens to Bloodshot. It completely and utterly alters his life, and everything we know and everything we've ever seen of Bloodshot is really turned inside out" Lemire told CBR when the series was first announced. "I can honestly say that I've read every Bloodshot comic published now, and this Bloodshot story is unlike any that's every been published."
"[I]t's tremendous. It really is a masterpiece," Valiant CEO/CCO Dinesh Shamdansi told CBR News of the creative team's new take on the classic character, while Editor-in-Chief Warren Simons describes the book as "all new, and it's all innovative, and it's all f***ing amazing."
"Bloodshot: Reborn" debuts April 15.

TRILLIUM named of of YALSA's 10 Great GNs for Teens! 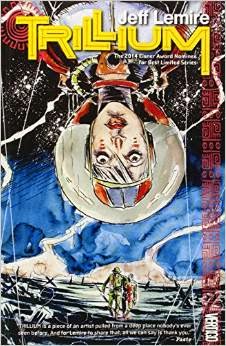 WHAT PEOPLE ARE SAYING ABOUT DESCENDER...

“Jeff Lemire has a real talent for ​drawing me into cold, alien worlds that I'd never dream I'd care about and then having me not want to leave them.”--Mark Waid, IRREDEEMABLE

“No question, a large part of the emotional success of the book is due to artist Dustin Nguyen, whose familiar pencils punctuated with watercolor finishes lend a stunning wash to the entire world of Descender and its occupants. . . .
A remarkably subtle beginning to what is clearly going to be Image Comics’ next great space epic, Descender #1 has everything you need to get hooked — political intrigue, social unrest, planet-level danger, and, most importantly, a boy with his dog. If you’ve been a fan of Lemire and Nguyen’s work, you won’t need any convincing of Descender’s greatness. And if you haven’t had the pleasure yet, there’s no better place to start.”-COMICOSITY.COM

"What a beautiful, beautiful book. DESCENDER is worth buying for the artwork alone, so it's almost a bonus that it tells such a compelling story about the future of humanity in a universe filled with terrors (planet-sized killer robots, for one). I can't wait to see where it goes."-- Charles Soule (LETTER 44)

“DESCENDER dazzles. . .One hell of a creator-owned debut by Nguyen, who looks like he’s on the verge of taking his art to another level by taking it in a different direction. You won’t want to miss this comic, folks..”--MULTIVERSITY

“There's a lot of imagination in this book.”--CBR

“When considered within comics culture, it’s easy enough to see in Jeff Lemire and Dustin Nguyen’s DESCENDER the strands of creative DNA that reach back to classics like Tezuka’s THE MIGHTY ATOM or Urasawa’s PLUTO. But when considered within the broader context of popular culture, Lemire’s writing and Nguyen’s art usher us into the presence of a work every bit as powerful as 2001: A SPACE ODYSSEY or ALL THE PRESIDENT’S MEN.” —Dr. Shathley Q, PopMatters Comics Editor.
Posted by Jeff Lemire at 3:53 PM