I've been meaning to put together a comprehensive bibliography of all my comics work for some time. Looking at what I've compiled, I realized I've actually drawn over 1900 pages of published comics since 2005! Most of that I wrote as well. That doesn't include the comics which I wrote for DC in that time (to date I've written over 1100 pages of comics for other artist) for a total of just over 3000 pages of published comics since 2005!

And before you email to ask, I have NO copies of any of the out of print books for sale, sorry.

THE FORTRESS. 2006 3-parts of a serialized post-apocalyptic comic published in Canadian Magazine UR. The magazine folded before the comic could be completed.
(Writer/Artist)

FLASHPOINT: FRANKENSTEIN AND THE CREATURES OF THE UNKNOWN #1-3 -2011- DC Comics. (3-part mini-series.PArt of the FLASHPOINT crossover event. Later collected in FLASHPOINT: THE World of GREEN LANTERN paperback)
(Writer Only)

MEN OF WAR: UNEASY COMPANY-2012- DC Comics. (Collects #1-9 of the minthly seroes. Co-Wrote #9 of the series, A FRANKENSTEIN Story, with Matt Kindt)
(Writer Only)

JUSTICE LEAGUE DARK #9-, 2012- DC Comics (Took over as writer with Issue #9 of the monthly book. Currently at issue 13 with an annual and a zero issue also)
(Writer Only. Issue 14 Co-written by Ray Fawkes)

We asked Lemire to share some thoughts about the new series and here’s what he said: “As Sweet Tooth moved towards its conclusion earlier this year, I started to look ahead to what my next creator-owned project for DC/Vertigo could be. I pitched a number of ideas to editor Mark Doyle that I wasn't totally happy with.  Finally he pushed me to leave my comfort zone, and get away from the genres and themes that I'd become known for.

Sci-Fi is something I've wanted to tackle for a while. I experimented a bit with it last year when I did the ULTRA THE MULTI-ALIEN short story for Vertigo's STRANGE ADVENTURES anthology and enjoyed that project so much that I was eager to do more. I've also always wanted to do a really powerful, human love story. There have been so few love stories done really well in comics. Preacher and Blankets come to mind as recent successes, but in my mind, it’s still a difficult and rather unexplored genre in the comics medium. It seemed like just the kind of challenge Mark was pushing me to undertake. So, I combined these two interests along with my ongoing fascination with in World War 1, and turn of the century exploration, and the results are TRILLIUM.”

It’s the year 3797 and botanist Nika Temsmith is researching a species of strange plant-based life forms on a remote science station near the outermost rim of colonized space.

Lemire continued, “It will be my most ambitious creator-owned project and my most challenging. I think fans of my previous work will see traces of both SWEET TOOTH and THE UNDERWATER WELDER in its chemistry, but I really do want to push myself in new directions as well.

TRILLIUM is a mind-bending sci-fi thriller about the end of the universe. And, it's a story about the dawn of human exploration and its natural conclusion thousands of years away. But most of all it’s a love story. And I can't wait to share it with you.”

Check out Lemire's gorgeous promo images below and get ready for the story to begin in 2013.

ALSO: Take note that tomorrow afternoon there will be a major announcement about a new project! So, if you can't make the Con, check back here or on DC's BLOG for the news! (A LITTLE TEASER IMAGE BELOW!) 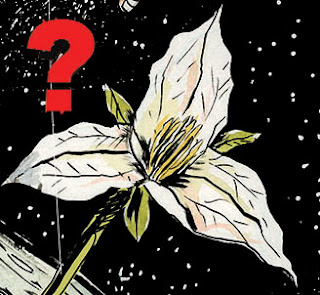