IN MEMORY OF ROB CHARPENTIER 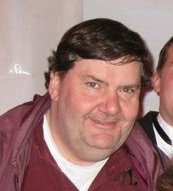 This past week Rob Charpentier, the owner of my local comic book store in Toronto's east end, passed away after a battle with cancer. Rob will be missed by all the loyal patrons and friends at his shop Comics And More at Greenwood and Danforth.

When I first moved from the west end to the east end about seven years ago, I felt pretty displaced and Rob and his store were my anchor. It was great to not only have a comic shop in my new neighbourhood, but to have a really good comic shop with an owner who was willing to take chances on the work of newcomers. At the time I had very little published material under my belt, but Rob was always a very great supporter, making sure to order all off my books and promote them in the store.

Over the years, I got to know Rob better, visiting at least twice a week. Rob was always the first to  what new DC projects I'd be doing, based on the stacks of "reference material" I'd come in and buy.

I was saddened to learn about Rob's illness a couple months back. He was unable to work at the store anymore, but continued reading. One of his fears near the end was not getting a chance to see the end of Grant Morrison's long anticipated Multiversity project. (It should be noted that when I reached out to DC Comics about this they helped connect Grant with Rob. Grant spent nearly an hour talking to Rob on the phone in his hospital room. DC and Grant's kindness was not lost on Rob or his friends at the store, and was a real bright spot for Rob near the end).

Rob was a great guy, always full of opinions on the state of comics, but also always willing to support new ideas and new voices in the medium. His death leaves a big hole in our neighbourhood. Rob will be truly missed.